The interpretation of machine learning models and their predictions has become quite important lately. The interpretation of models to better understand which features actually contributed to a particular prediction gives confidence to the model creator. It also helps to better explain why the model is behaving in a particular way. The python has many libraries (like lime, shap, eli5, yellowbrick, etc) which provide different ways to explain model predictions. We have already created tutorials on these libraries (See References section). As a part of this tutorial, we'll be explaining the library named interpret-ml which is designed by the Microsoft research team. The interpret-ml is an open-source library and is built on a bunch of other libraries (plotly, dash, shap, lime, treeinterpreter, sklearn, joblib, jupyter, salib, skope-rules, gevent, and pytest). The interpret-ml creates an interactive dashboard of visualizations using plotly and dash which can explain data, model performance, and predictions from different perspectives. It has divided different explainer classes used for different purposes in different modules. Please make a note that interpret-ml is still in alpha release and constantly getting developed as of the date when this tutorial is created.

We'll be explaining the usage of three main modules as a part of this tutorial.

Below we have given a list of classes available in the data module of interpret-ml which we'll explain.

We'll be using one classification dataset and one regression data to explain classes available from data, glassbox, and perf modules.

Below we have loaded the breast cancer dataset as pandas dataframe as well and printed the first few rows of data. We have even printed a description of features that are available in the dataset.

As a part of explain data section, we'll be explaining the usage of explainers available from the data module to explain the breast cancer dataset.

We can create an instance of this class by passing a list of feature names to the feature_names parameter. It'll create an explainer instance.

Below we have called the explain_data() method on the explainer instance created in the previous step. We have passed actual data and target to the method. It'll create an explanation object.

Below we have called the show() method passing it explanation instance created in the previous step. It'll generate an interactive dashboard with a dropdown which will let us see various features histogram per class of data.

This class lets us create a marginal chart. We have created an instance of the Marginal class by giving it a list of feature names. It'll create an explainer instance.

Below we have called the explain_data() method on the explainer instance from the previous step by giving data and target to the method. It'll generate an explanation instance which we'll display using the show() method.

As a part of this section, we'll explain three different explainer classes available from the glassbox module. We'll first divide our dataset into train (80%) and test (20%) sets using train_test_split() method of sklearn.

The first explainer that we'll explain uses sklearn's logistic regression for classifying samples. We have below created an instance of class glassbox.LogisticRegression by giving it a list of feature names of data. This is our explainer instance.

The logistic regression explainer instance has a method named fit() and score() which lets us fit train data to model and calculate model accuracy on the test dataset.

The explain global method generates global weights of the model which are generally available as coef_ and intercept_ attribute of the model.

The explain_local() method lets us explain model prediction on an individual sample by showing us a bar chart of how much individual features contributed to this prediction. It accepts a list of samples and their predictions as input for generating an explanation object. Below we have generated an explanation instance on the breast cancer test dataset.

The second explainer that we'll explain as a part of this section is ClassificationTree which is a decision tree-based explainer. Below we have created an explainer instance, fitted train data, evaluated the accuracy of the model, and then generated explanation instances for global and local explanations.

We have then plotted both explanation instances using the show() method.

The third explanation instance that we'll explain as a part of this section is ExplainableBoostingClassifier. It’s based on gradient boosting machines. We have first created an explainer instance, fitted train data, calculated test accuracy, and then generated local/global explanations.

As a part of this section, we'll be explaining how to generate the ROC curve and precision-recall curve for classification problems using classes available from the perf module of interpret-ml.

The explainer instance created in the previous step has a method named explain_perf() which accepts data and target variables to generate an explanation instance which has precision-recall curve on that data. 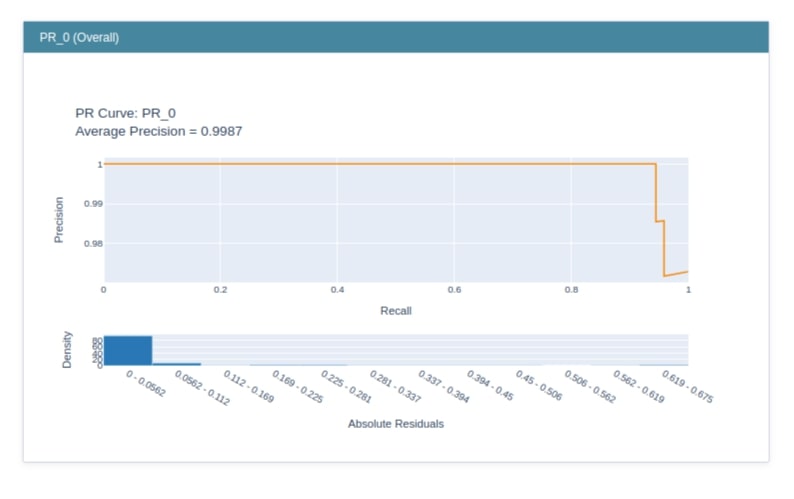 The ROC class will be used for creating an ROC AUC curve for our model. It accepts prediction function and feature names for creating explainer instance. 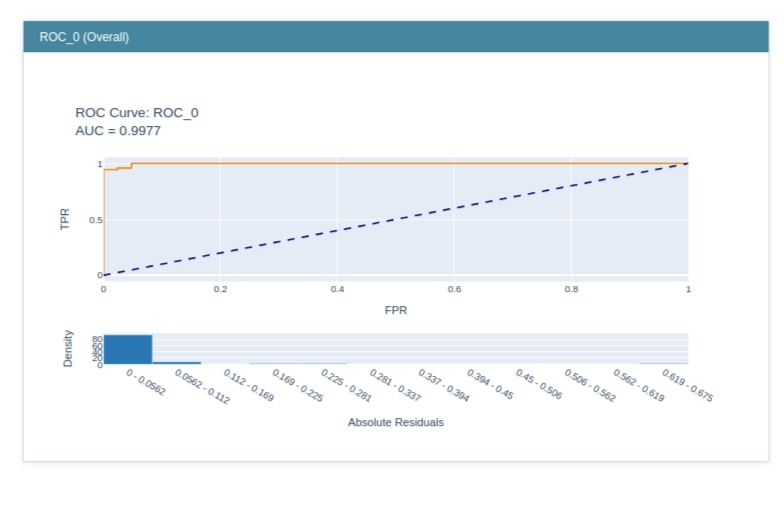 The show() method which we have used till now can also accept a list of explanations and generate a dashboard of all visualizations.

We can even pass explanations generated across different models to compare performance across models as explained below. 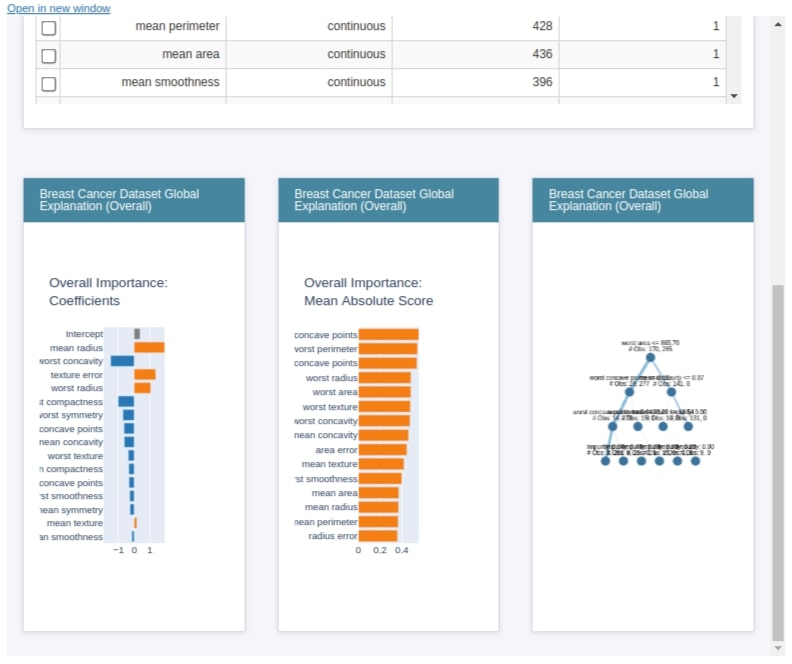 Below we have generated a marginal plot for the Boston dataset using the Marginal class by giving it feature names as a list. 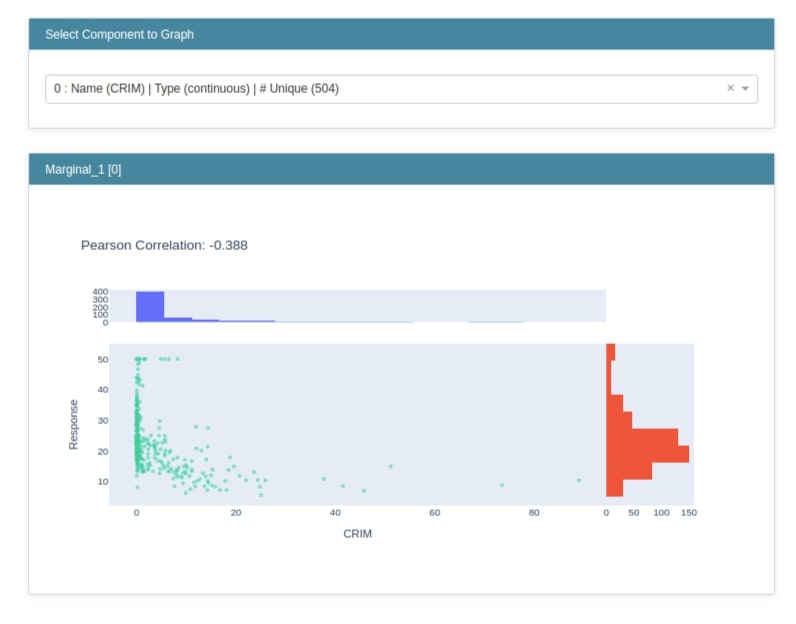 As a part of this section, we'll explain local and global explanations using three different models available with the glassbox module of interpret-ml.

The first model that we'll use for explaining global and local explanations is Linear Regression. The Linear class of glassbox uses the LinearRegression model available from scikit-learn.

We have first created an instance of LinearRegression which is our explainer object. We have then fitted train data to it and printed the R2 score on test data. We have then created explanation objects for local and global explanations.

We have then created visualizations using the show() method. 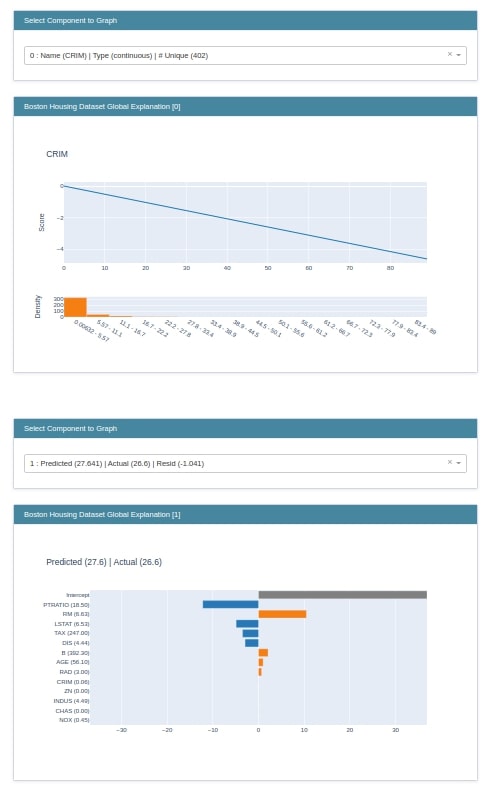 The second estimator that we'll explain is RegressionTree. It’s a decision tree-based model. We have created an instance of RegressionTree, fitted train data to it, and evaluated the R2 score on test data. We have then created local and global explanations using explainer object. At last, we are displaying both explanations using the show() method. 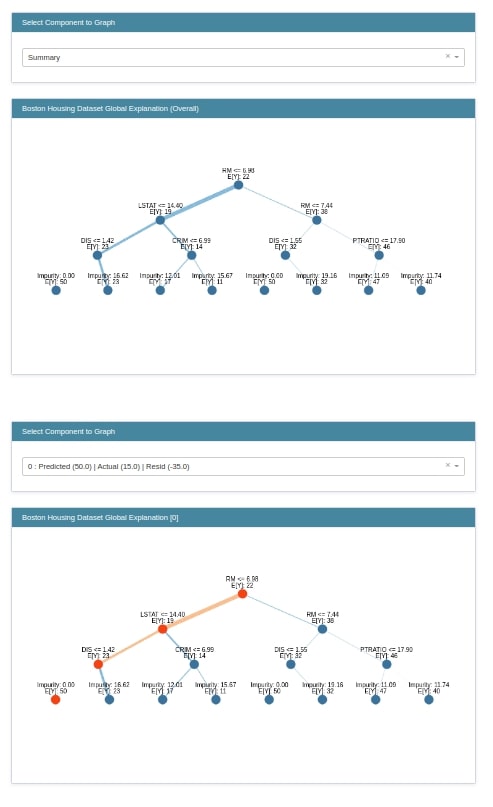 The third instance that we'll explain is ExplainableBoostingRegressor which is based on gradient boosting machines. We'll follow the same process as previous examples to create local and global explanations for the Boston dataset. 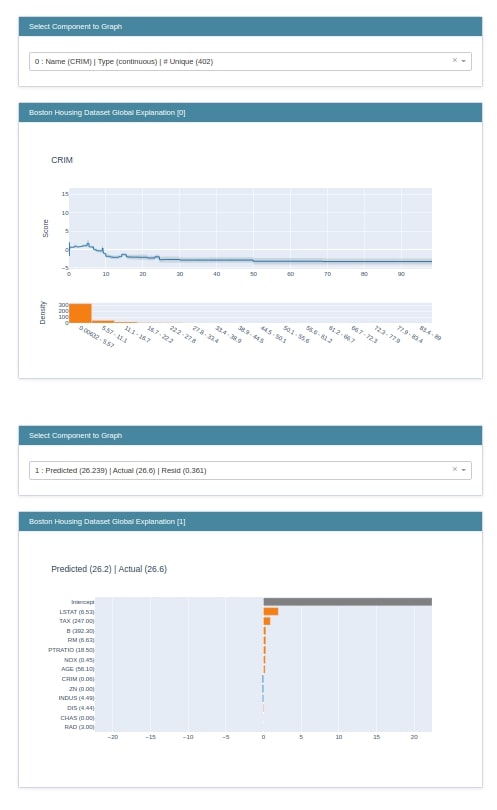 As a part of this section, we'll explain performance metrics like RMSE and R2 Score calculations for samples of test data.

The RegressionPerf class is responsible for generating visualizations related to regression problems. Below we have generated an instance of RegressionPerf by giving it prediction function and features names as input. This is our explainer instance. We have then called the explain_perf() method on it to generate regression performance metrics explanation. At last, we have displayed an explanation using the show() method. 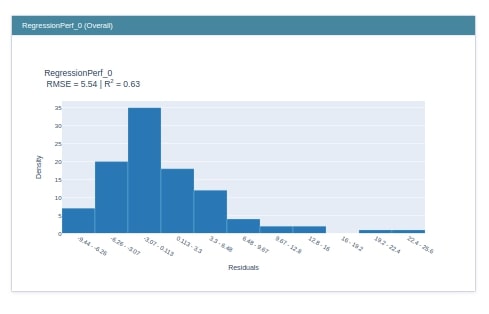 This ends our small tutorial explaining data, glassbox, and perf modules of the interpret-ml library. Please feel free to let us know your views in the comments section.

About: Sunny Solanki holds a bachelor's degree in Information Technology (2006-2010) from L.D. College of Engineering. Post completion of his graduation, he has 8.5+ years of experience (2011-2019) in the IT Industry (TCS). His IT experience involves working on Python & Java Projects with US/Canada banking clients. Since 2020, he’s primarily concentrating on growing CoderzColumn.

His main areas of interest are AI, Machine Learning, Data Visualization, and Concurrent Programming. He has good hands-on with Python and its ecosystem libraries.

Apart from his tech life, he prefers reading biographies and autobiographies. And yes, he spends his leisure time taking care of his plants and a few pre-Bonsai trees.

If you are more comfortable learning through video tutorials then we would recommend that you subscribe to our YouTube channel.

Stuck Somewhere? Need Help with Coding? Have Doubts About the Topic/Code?

When going through coding examples, it's quite common to have doubts and errors.

If you have doubts about some code examples or are stuck somewhere when trying our code, send us an email at coderzcolumn07@gmail.com. We'll help you or point you in the direction where you can find a solution to your problem.

You can even send us a mail if you are trying something new and need guidance regarding coding. We'll try to respond as soon as possible.

If you want to

Please feel free to contact us at coderzcolumn07@gmail.com. We appreciate and value your feedbacks. You can also support us with a small contribution by clicking DONATE.