Scikit learn is a very commonly used library for trying machine learning algorithms on our datasets. Once we have trained ML Model, we need the right way to understand performance of the model by visualizing various ML Metrics. We need to understand whether our model has generalized or not.

But plotting with matplotlib requires quite a learning curve. One minor mistake when implementing visualizations can result in interpreting results totally wrong way. This can even slow down the process of testing various algorithms if data scientist is involved in getting visualizations right.

In short, it can even slow down whole train-test process and experimentation cycle.

But what if you have a Python library that is ready-made for plotting ML Metrics?

It'll fasten your whole experimentation cycle a lot as you won't be involved in getting visualizations right. The data scientist can then peacefully concentrate on his/her machine learning algorithm's performance and try many different experiments.

Python has a library called Scikit-Plot which provides visualizations for many machine learning metrics related to regression, classification, and clustering. Scikit-Plot is built on top of matplotlib. So if you have some background on matplotlib then you can customize charts created using scikit-plot further.

> What Can You Learn From This Article?¶

As a part of this tutorial, We have explained how to use Python library scikit-plot to visualize ML metrics evaluating performance of ML Model. We have explained how to create charts to visualize ML Metrics for Classification, Dimensionality Reduction, and Clustering tasks. Apart from metrics, we have also explained training progress chart and features importances charts available from scikit-plot. We have trained scikit-learn models on toy datasets for our purposes. Tutorial tries to cover the whole API of scikit-plot.

Below, we have listed important sections of tutorial to give an overview of material covered.

We'll start by importing the necessary Python libraries for our tutorial. We have also printed the versions that we used in our tutorial.

We'll be loading three different datasets which we'll be using to train various machine learning models. We'll then visualize the results of these models.

The first dataset that we'll load is digits dataset which is 8x8 images of numbers. It's readily available in scikit-learn for our usage.

The second dataset that we'll use if a cancer dataset which has information about the malignant and benign tumor. It's also readily available in scikit-learn for our use.

We'll divide it as well in train (80%) and test sets (20%). We have also printed features available with the dataset.

The third dataset that we'll use is the Boston housing price dataset. It has information about various houses of Boston and the price at which they were sold. We'll divide it as well in train and test sets with the same proportion as above mentioned datasets.

Scikit-plot has 4 main modules which are used for different visualizations as described below.

The module that we'll be exploring is the estimators module. We'll be plotting various plots after training ML models.

Below we are plotting the performance of logistic regression on digits dataset with cross-validation. 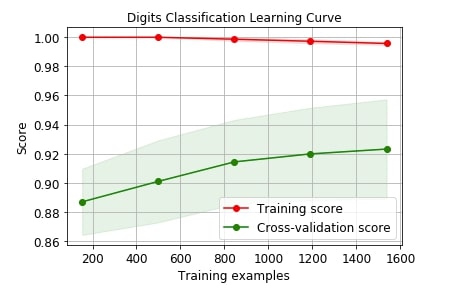 Below we are plotting the performance of linear regression on the Boston dataset with cross-validation. 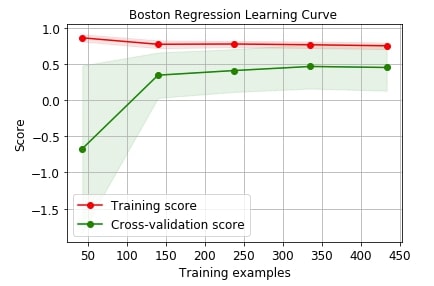 The second chart that we'll be plotting is a bar chart depicting the importance of features for various ML models. We'll first train random forest on the Boston dataset and gradient boosting on the cancer dataset. We'll then plot feature importance available from both models as a bar chart using plot_feature_importances() method of estimators module of scikit-plot.

Below we have a combined chart of both random forest and gradient boosting into one figure because scikit-plot is based on matplotlib and lets us include more details on graphs using matplotlib.

The third chart that we'll plot is the calibration curve also known as reliability curve. Scikit-plot provides a method named plot_calibration_curve() as a part of the metrics module for this purpose.

The calibration curve is suitable for comparing the performance of various models as well as understanding which threshold value for deciding class label is leading to model overfit or underfit. The points in various model lines which are above way above-dashed line have overfitted and one below the dashed line has under fitted. We need a model where points are mostly near the dashed line.

We are first training logistic regression random forest, gradient boosting, and extra trees classifier on cancer train data and then predicting the probability of test data generated by each model. We then pass actual test labels and a list of predicted test probabilities by each model to plot_calibration_curve() to plot calibration curve. We also pass a list of classifier names for having legends in the graph. 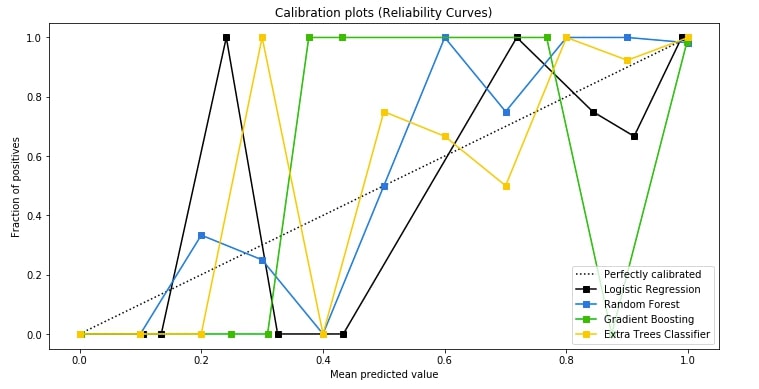 We'll now explore various plotting methods available as a part of the metrics module of scikit-plot. 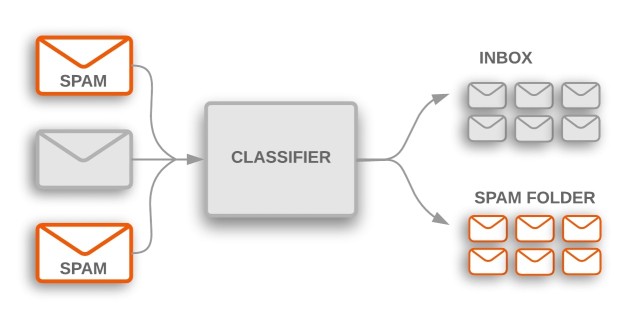 To start with it, we'll first train logistic regression on the digits dataset. We'll then use this trained model for various plotting methods.

We need to pass original values and predicted values in order to plot a confusion matrix.

The second metric that we'll plot is the ROC AUC curve. Scikit-plot provides methods named plot_roc() and plot_roc_curve() as a part of metrics module for plotting roc AUC curves. We need to pass original values and predicted probability to methods in order to plot the ROC AUC plot for each class of classification dataset. 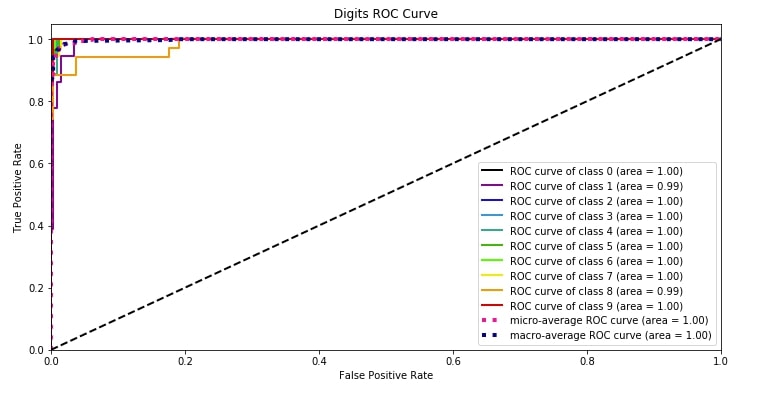 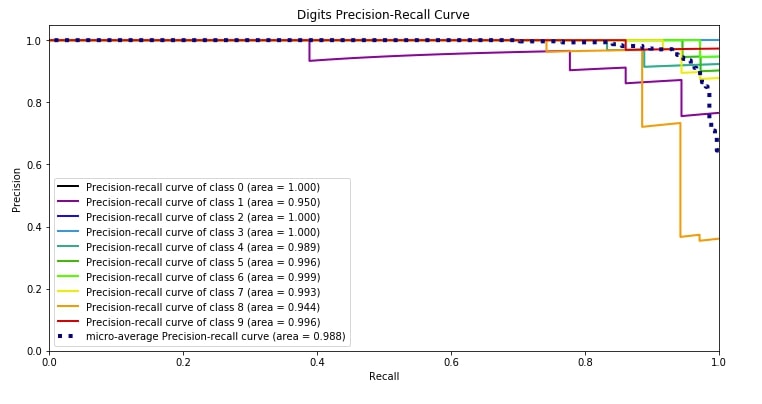 The fourth metric that we'll be plotting is the KS statistics plot. Scikit-plot module metrics has method named plot_ks_statistic() for this purpose.

KS Statistics is for binary classification problems only. The KS statistic (Kolmogorov-Smirnov statistic) is the maximum difference between the cumulative true positive and cumulative false-positive rate. It captures the model's power of discriminating positive labels from negative labels. KS Statistics Plot is for binary classification problems only. 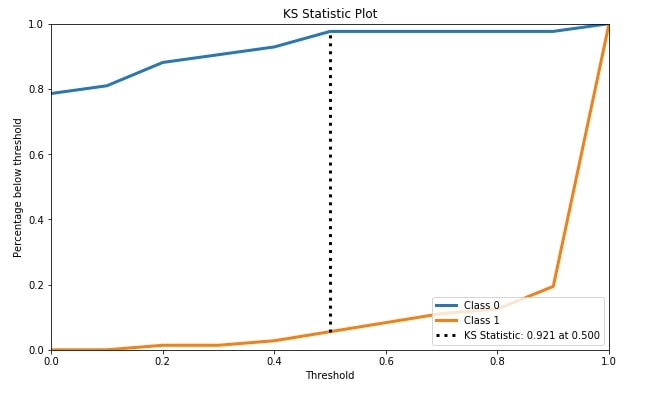 Cumulative Gains Curve is the fifth metric that we'll be plotting using scikit-plot. It provides a method named plot_cumulative_gain() as a part of the metrics module for plotting this metric.

Cumulative gains chart tells us the percentage of samples in a given category that were truly predicted by targeting a percentage of the total number of samples. It means when we took that many percentages of samples from the total percentage that we get from the curve for y-axis are labels which were truly guessed by model from a total number of samples of that class in that many samples. The dashed line in the chart is the baseline curve (random guess model) and our model should perform better than it and both class curves should be above it ideally. Cumulative Gains Curve is for binary classification problems only.

We need to pass its original labels of data and predicted probabilities by the trained model in order to plot the cumulative gains curve. 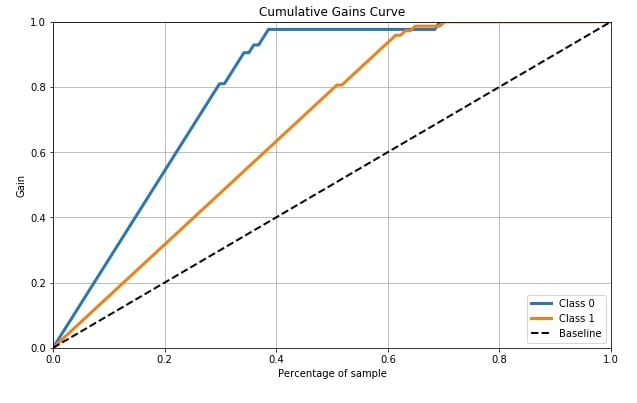 The sixth and last metric that's available with scikit-plot is the Lift curve. Scikit-plot has a method named plot_lift_curve() as a part of the metrics module for plotting this curve.

The lift chart is derived from the cumulative chart by taking a ratio of cumulative gains for each curve to the baseline and showing this ratio on the y-axis. The x-axis has the same meaning as the above chart. The lift curve is for binary classification problems only.

We need to pass its original labels of data and predicted probabilities by the trained model in order to plot the lift curve. 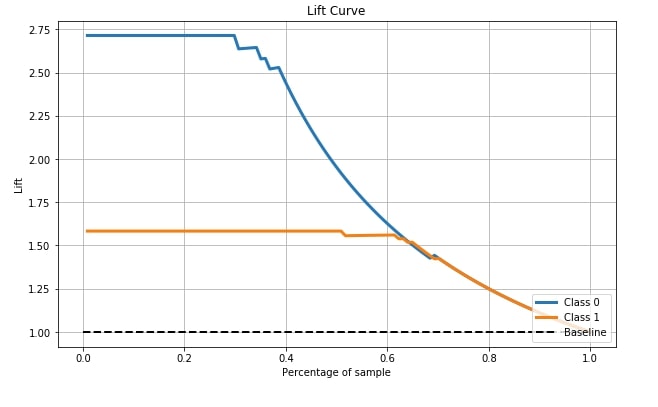 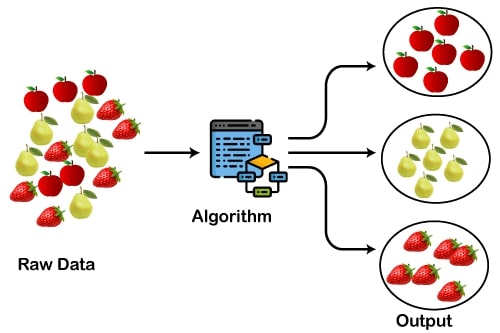 The only clustering plot that is available with scikit-plot is the elbow method plot. Scikit-plot provides method named plot_elbow_curve() as a part of cluster module for plotting elbow method curve.

We need to pass the clustering algorithm and original data along with an array of cluster sizes to plotting method in order to plot the elbow method curve. 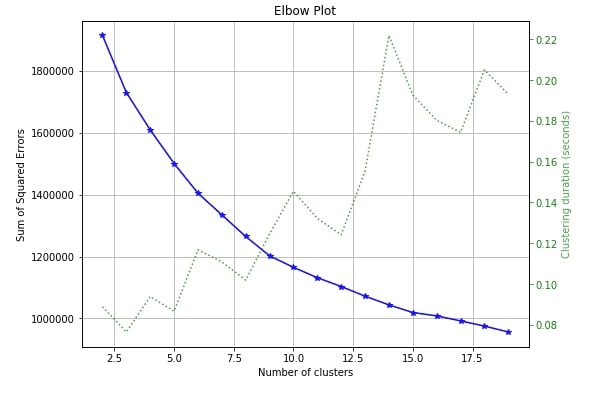 The second metric that we'll like to plot is the silhouette analysis plot for clustering machine learning problems.

Below we are first training our KMeans model on digits train data and then we are passing predicted test labels along with original test data to plot_silhouette() method for plotting silhouette analysis. 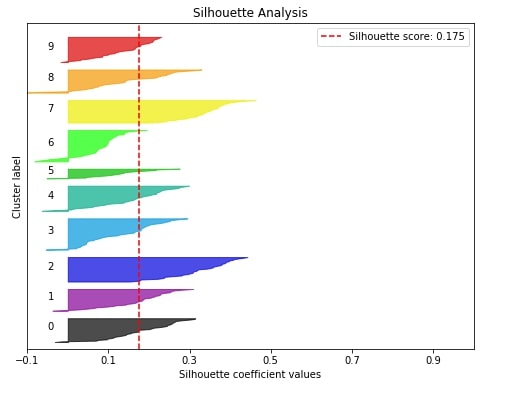 There are two plots available with dimensionality reduction module of scikit-plot.

The first dimensionality reduction plot that we'll explore is the PCA component explained variance. Scikit-plot has a method named plot_pca_component_variance() as a part of the decomposition module for this.

The PCA components explained variance chart let us know how much of the original data variance is contained within first n components.

Below we can see from red dot that 76.2% of digits data variance is present in 11 components. We can see that nearly 45 components have nearly a 100% variance of data. We can decide from this graph how much the percentage of original data's variance is enough for better model performance and take components accordingly which will result in reducing the dimension of original data.

We need to pass trained PCA on the dataset to method plot_pca_component_variance() in order to plot this chart. 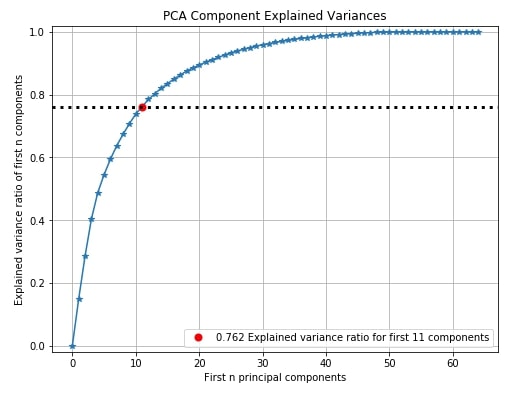 The second plot for dimensionality reduction that we'll plot is a 2D projection of data transformed through PCA. Scikit-plot provides method named plot_pca_2d_projection() as a part of decomposition module for this purpose.

We need to pass it trained PCA model along with dataset and its labels for plotting purposes. 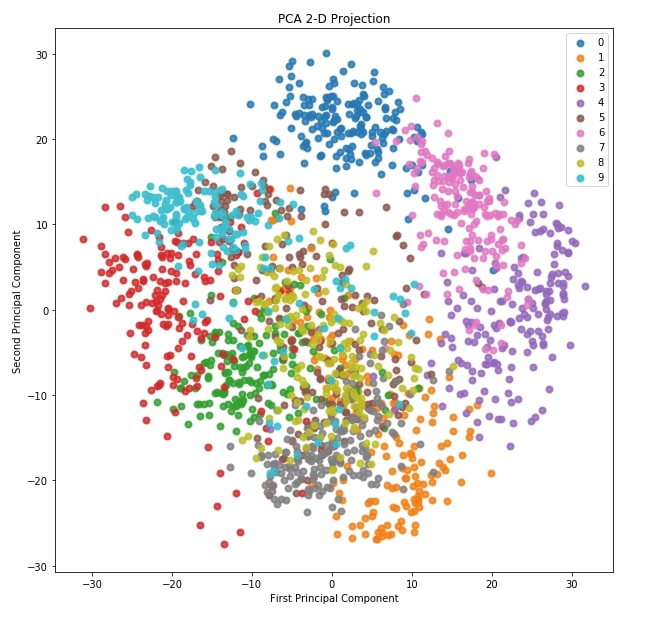 Evaluating ML Metrics is generally a good starting point for checking performance of ML models. It can give us an idea of whether model has generalized or not. But there can be situations where ML metrics are not enough. The results of our metrics are quite good but our model is not generalizing. E.g., A simple cat vs dog image classifier can be using background pixels to classify images instead of actual object pixels.

In those situations, we need to look at predictions made by models on individual examples.

> Why Should We Interpret Predictions Of ML Models?¶

To interpret individual predictions, many algorithms have been developed. Different Python libraries (lime, shap, eli5, captum, treeinterpreter, etc.) provide an implementation of these algorithms. It can help us dig deeper to understand our model better at individual example levels.

We would suggest that you read about interpreting predictions of ML Models in your free time. Below we have listed tutorials providing guidance on topic.

About: Sunny Solanki holds a bachelor's degree in Information Technology (2006-2010) from L.D. College of Engineering. Post completion of his graduation, he has 8.5+ years of experience (2011-2019) in the IT Industry (TCS). His IT experience involves working on Python & Java Projects with US/Canada banking clients. Since 2020, he’s primarily concentrating on growing CoderzColumn.

His main areas of interest are AI, Machine Learning, Data Visualization, and Concurrent Programming. He has good hands-on with Python and its ecosystem libraries.

Apart from his tech life, he prefers reading biographies and autobiographies. And yes, he spends his leisure time taking care of his plants and a few pre-Bonsai trees.

If you are more comfortable learning through video tutorials then we would recommend that you subscribe to our YouTube channel.

Stuck Somewhere? Need Help with Coding? Have Doubts About the Topic/Code?

When going through coding examples, it's quite common to have doubts and errors.

If you have doubts about some code examples or are stuck somewhere when trying our code, send us an email at coderzcolumn07@gmail.com. We'll help you or point you in the direction where you can find a solution to your problem.

You can even send us a mail if you are trying something new and need guidance regarding coding. We'll try to respond as soon as possible.

If you want to

Please feel free to contact us at coderzcolumn07@gmail.com. We appreciate and value your feedbacks. You can also support us with a small contribution by clicking DONATE.